It was 9:30am on a cloudy Tuesday in Manchester, I had just gotten off a bus and had absolutely no idea where I was. ‘Keep calm’, I told myself. ‘You’ve got this. Today’s only the day you’ve anticipated for months, nothing more. No biggie, right?’.

As a full-time German student, I’d had the idea to do an internship in the UK about a year ago and as I had been in love with England since I first came here and really wanted to gain some practical experience before burying myself in textbooks for another five years, I immediately knew I had to do it. It had all seemed so far away back then, but time had flown by and soon I was already standing in Albert Square with my A-Levels done, my application to study English and Media at the University of Cologne sent in and 6 weeks of work experience at a company specializing in Sales Consultancy for technology companies ahead of me.

With determination, I opened up Google maps and started walking, not particularly sure where I was going and soon realising that I was getting further and further away from my destination. At this point, I started to worry I might be lost which was confirmed when every single person I asked for directions told me they’d never heard of the address, to the point where I was starting to question whether it was real myself.

After about half an hour of walking in circles and feeling very confused and disoriented, I was standing in front of a giant glass building that was so big that I could barely see the top of it. “You have arrived at your destination”, my phone announced in a cheerful voice. Not really trusting Siri and her directions, I scanned the building again. Dozens of business people were streaming in and out of it, making me feel small and even more lost than before. I was still convinced I wasn’t at the right place, but since I didn’t really know where else to go, I decided to give it a try and go inside.

“How can I help you?”, a friendly receptionist asked me. I had probably been standing in the foyer for at least 5 minutes watching people walk past guards and passing the security gates that looked almost like the ones at London tube stations and looking completely befuddled.

“Uhm… hello. I’m not sure whether I’m right here, but I’m the new intern at the Sales Consultancy, is that here?”

“Yes, I’ll give them a call! Would you just step back so we can take a photo for your visitor pass?”

This really felt more like a science fiction movie than an office.Relieved, but still buzzing with nerves for the day ahead, I let myself fall onto one of the extremely comfortable sofas in the lobby.

When my boss, Carrie, eventually came to pick me up and show me the office, I was once again absolutely gobsmacked. The room was so big and filled with new people that I could easily have been intimidated, but the atmosphere seemed so nice and welcoming that I instantly felt more relaxed. After being introduced to some people in the office who were all working for different businesses and going through my schedule for the week, it was time for me to start working on my first task: researching the most important marketing terms, writing up definitions and eventually preparing a presentation on content marketing, which turned out to be a lot more difficult than expected.

As I had never dealt with marketing at school before, I was surprised to find out how incredibly multi-faceted and diverse the whole subject is. Obviously, I knew about the kind of marketing that companies use to directly advertise their products as they do in ads on telly or in the newspaper, but the concept of using strategies such as B2B marketing or thought leadership to establish a business’ brand was completely new to me. At first, I admittedly felt a bit lost scanning article after article, each of them overflowing with technical terms, most of which I was reading for the first time in my life. In spite of these initial difficulties, it didn’t take long until I slowly started to get an understanding of content marketing and was eventually able to make out the meaning of every single term on my list.

When I left the office a few hours later, feeling challenged and like I had learned a lot in only one day, I was already looking forward to coming back.

After I had done enough research, delivered a presentation on the basics of content marketing and gotten a general understanding of the company and the industry they’re operating in, I already got the chance to do some actual work for the company.

For example, I took care of their social media by searching for shareable links online and scheduling posts on Hootsuite, which is a social media management website that links all your accounts.

Since posts are more likely to be seen if they include an image, I also created a lot of different edits with a programme called Canva, which I then published as well.

To be honest, managing a company’s social media seemed a very scary task at first and I was constantly aware that one wrong click could lead to a minor catastrophe, such as accidentally posting on a wrong account, making an embarrassing grammar mistake or sharing a funny cat video instead of an article on successful marketing in the tech sector, only to name a few of the various horror scenarios going through my mind. Luckily though, I was relieved to find out that nothing of that kind actually happened and quickly got used to the scheduling tool, realising that it’s in fact a very useful service that can save you a lot of time.

Since I’ve been very interested in writing and journalism ever since I was little, I was immediately hooked when Carrie suggested I could do a weekly intern blog to share my experiences.

Apart from that, I also got to publish an entire post on content marketing, which was definitely a lot more challenging due to the complexity of the topic and the formal and technical language I had to use, but also incredibly interesting to write.

During my time at the company, we also took on a big new project: A podcast. To be begin with, I approached the new venture by listening to some other sales podcasts, taking notes about what was well-made and what could be improved.

There were of course many different things to consider before we could get started, like how to record the podcast, how to make an intro and edit the audio, which music to use, which type of content to focus on, how to post it on a website and submit it to iTunes etc., so it was obviously necessary to do a lot of research beforehand.

In the end, we didn’t get around to recording an entire episode before I left, but I did put together an intro and outro for the podcast with Audacity.

Since the company are working on a training and resource hub that is going to go online in November, I also spent a lot of time helping to prepare the launch of the website.

To get the word out to businesses who might be interested in this new project, I started off by creating social media accounts for the online academy and making some images and banners to post on there.

Since signing up for the hub was already possible, we also had to put together a guide on Account Planning to send out to people who register. Thus, we recorded an audio with all the information we needed, which I then typed out and edited. Turning an entire 3500 words report from spoken into formal written language was quite a challenge and my desk was soon covered in piles of paper with different printed out versions that I searched for mistakes over and over again while eating an entire family pack of Cadbury fingers by myself.

It took a lot of time and even more chocolate, but after a few hours of changing around sentences, replacing words, cutting out repetitions, adding details, and spotting and correcting mistakes, we were finally happy with the finished piece and sent it out to everyone who had already signed up.

Creating a communications plan for some of the company’s clients was probably one of the most challenging tasks I was faced with during my internship. A communications plan is basically a social media guide customers receive alongside blog posts, so I essentially had to come up with Twitter and LinkedIn posts and hashtags to promote articles that the company had already created.

This sounds like a simple enough thing to do, and some of the posts were quite easy to understand, but others dealt with such specific tech topics that I almost thought I was reading in a completely different language. Despite having to translate every second word and then despairing because I didn’t understand the German term either, I eventually more or less got what the articles were about and was able to write a few sentences about each one.

One of my favourite things to do was working with VideoScribe, a programme that allows you to create animated whiteboard videos. I began with trying to turn an already finished PowerPoint presentation into a video, which – after a few initial difficulties, such as duplicating the whole thing and not being able to undo it and accidentally making the animated hand write so fast that it would probably have fallen off in real life – actually went pretty well.

To give people an even better insight into what the online academy offers and how it can help their business increase sales, I then started working on an introduction video, and even though the finished project was only about three minutes long, there was a lot of work behind it as the audio had to be recorded and edited, the text and graphics had to be chosen and everything had to be fitted together to the exact second.

However, after creating at least 5 different versions and finding new things to change every time we re-watched it, we were finally happy with it and uploaded it to YouTube.

Of course, I also had a lot of time off during the weekends, which I used to see as much of the country as I possible could, visiting Liverpool, Sheffield, Chester, Holmes Chapel, Llandudno, Buxton, Leeds and York, which has probably become my favourite place in the entire universe. 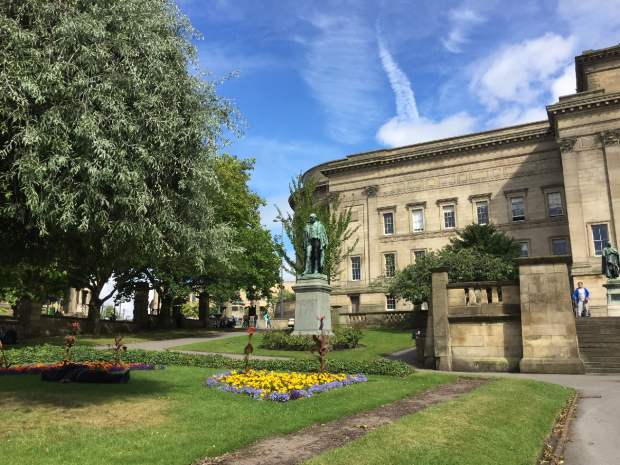 I had never before been to a city with so many bookshops and literally felt like I had died and gone to heaven without noticing as I was walking through the Shambles with a big smile on my face and a rucksack so heavy with books that I could barely carry it. It’s quite a miracle that I even managed to fit them all into my suitcase.

Even though no other place could quite exceed York and its cobbled streets, city walls and beautiful buildings, I absolutely adored every city I went to and secretly made plans to buy a house in every single one of them. (Not that I could ever afford that, but a girl can dream, right?)

Near the Shambles, York

People always say that time flies when you’re having fun and this statement couldn’t be any more true for my stay in England. Despite already having considered to drop out of uni before even starting it and “accidentally” missing my flight to stay in the UK, I eventually got on the plane back to Cologne, feeling absolutely gutted because I had to leave, but also incredibly grateful for the amazing time I’d had.